Shiver me timbers! Last weekend brought another great Mystic Pirate Invasion.  Again, the militia saved Mystic from the invading Pirates.  The streets are safe and bustling with shoppers, diners, and leaf peepers.  The weekend commenced with a showing of “Finding Neverland” at the historic Mystic-Noank Library to get the little ones in a pirating mood.

Grog for the Grown Ups

Saturday is for the grown-ups!  Another successful Pirate Pub Crawl in the books.  With 9 participating pubs and restaurants, Mystic was crawling with happy pirates for the afternoon event.  “Crawlers” received a playing card at each stop. The participant with the best “Pirate Poker” hand at the end of the Pub Crawl was named the winner.  Costumed Pirates, professional and amateur, were a sight to be seen on this beautiful October Day imbibing in the local grog. 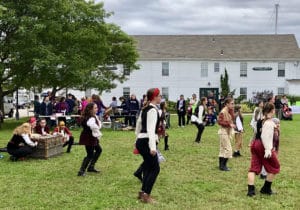 With a full invasion imminent, Sunday welcomed families to the Mystic River Park.  The day consisted of shanties by the Pine Point Choir and a beautiful routine by the amazing dancers of Kiks Dance Center.  At Noon that action really started heating up!  The Schooner Argia, chalk full of rowdy pirates, approached the drawbridge and invaded the docks of Mystic River Park.  After a small battle with the militia they “raided” town, with local celebrity and town officials in tow.  Their hostages were only released after being bailed out with funds raised going directly to the Terri Brodeur Breast Cancer Foundation.

The streets of Mystic were filled with the sights and sounds of little buccaneer’s in costume participating in a scavenger hunt.  X marked the spot to pirate booty prizes offered at a variety of local businesses, including The Whaler’s Inn of course. 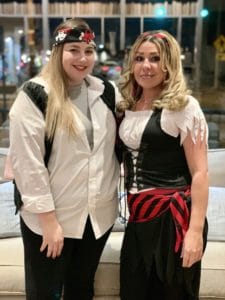 Our staff embraced their inner Pirate and dressed to impress while welcoming mini pirates on the hunt for treasure.  The 7th Annual Mystic Pirate Invasion is sponsored by the Downtown Mystic Merchants and takes place the first non-holiday weekend of October.  Be sure to book your room for next year to have a place to rest your weary sea legs after a long day!